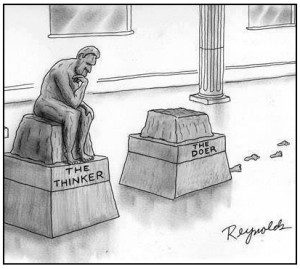 In June 1939, three months before England declared war on Germany, the U.S. military ranked 19th in the world—smaller than Portugal’s and only slightly ahead of Bulgaria. In 1944 we ranked 1st in the world.

In 1939 the U.S. produced $0.3 billion of combat munitions. By 1944 we were producing $44 billion annually — almost more than the Allied and Axis powers combined. This was equivalent to building a Panama Canal every week.

America’s response to World War II was the most extraordinary mobilization of an idle economy in the history of the world. Japanese bombs dropped on a U.S military base in the Pacific Ocean called the nation to attention and action.

It’s amazing what can be done when we’re properly motivated.

Most organizations can do more

Robert Schaffer says, “Join me in testing the view that most companies are functioning at only 40, 50, or 60 percent of their capacity, and that the much higher levels of performance reached in emergencies are actually more closer to true, sustainable potentials than are the ‘normal’ levels of performance.”

I once served as director of resources at a training and resource organization. One year, at the last minute, we thought it would be beneficial to have a new book to distribute at our national convention which would start in three weeks. We did what we had to do to get it done. We wrote, compiled, copy-edited, line-edited, typeset, designed the cover, and printed the book in 21 days.

Most individuals can do more

Years ago I thought it would be interesting and insightful to see how much work I could get done in one day. I determined that the upcoming Saturday would be the most productive day of my life. On a typical Saturday, I have about seven items on my to-do-list, but for this special day I had a list of 23 things I wanted to accomplish. I started early in the morning, maintained a brisk pace, and worked late into the evening and accomplished all 23 items.

I don’t want to maintain that pace every Saturday, but it did teach me that I can do a lot more if I want to or need to.

You may not want to maintain super-high capacity — it may be unsustainable, unhealthy or simply unappealing. But just know that the potential is there, and if the bombs start falling, you can rise to the demand.

What? – Most organizations and individuals can accomplish more than they normally do, if they want to or have to.
So what? – Productivity rates should be analyzed; are they adequate, unreasonable, or insufficient?
Now what? – Consider your rate of productivity. Are you satisfied with it?

Leaders – Have you and your team ever had an unusual and demanding circumstance that required you to perform at near-maximum production? How did you do? How then did you determine what should be a normal level of productivity?