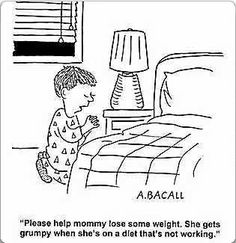 This old saying shows up a lot on t-shirts, coffee cups, and wall plaques. It’s supposed to make us smile, but it annoys me.

Shame on Momma for being so self-centered and narcissistic that she manipulates people with her emotional moods.

Momma is a bully.

A mature mother would have this attitude: Even though I may not be happy, I want others to be, so I’ll conduct myself in such a way as to conceal my unhappiness until I can find the right time, place, and method to deal with my challenges.

Bullying is the use of force, threat, or coercion to abuse, intimidate, harm, humiliate, or dominate others.

The only way to stop a bully is to resist him. Bullies can’t exist without victims, so if we refuse to be passive and actively resist their behavior, we can stop bullies in their tracks.

Some bullying is obvious: high-level Mafia-type extortion, tyrannical behavior at school or at the office. These certainly need to be identified and resisted. But there are also more subtle types of bullying—like Mamma making everyone unhappy if she’s unhappy.

Have you ever known someone whose behavior is so unpredictable and irrational that you feel like you’re constantly “walking on thin ice” when you’re around him? You always have to think twice about how and when to interact with him because you never know what mood he’s in. It’s a subtle form of bullying and he won’t quit until someone stands up to him.

My father was a bully. He manipulated others with his erratic, temperamental, and sometimes volatile behavior. His moodiness made everyone uncomfortable and on edge. Early on, someone should have told him, “Stop it. Your behavior will not be tolerated. Do that again and your family will leave and you’ll be all alone.” Sadly, no one ever pushed back. He was a bully until his death at age 77.

Summary
What? – Don’t be bullied.
So what? – As long as we play the role of a victim, bullies will continue their behavior. So tell bullies, “Stop!”
Now what? – Are you tolerating any bullies in your life? If so, calmly but forcefully resist. Don’t compromise or bargain with them.

Leaders – Do you bully others? Is there a bully on your team? Address this behavior.