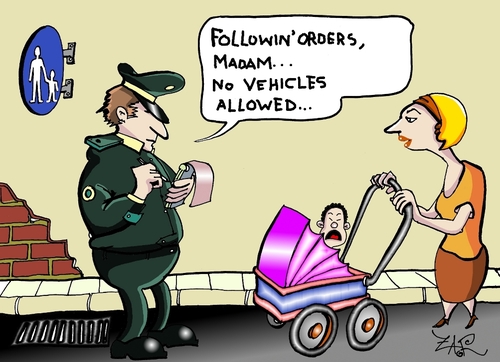 After returning to Earth from the first manned mission to the Moon, the Apollo 11 astronauts were required to comply with the rules of international (or in this case, interplanetary) travel. Astronauts Neil Armstrong, Buzz Aldrin, and Michael Collins had to go through customs at the Honolulu Airport.

The three astronauts went through the same process as any other travelers returning to the United States. They stood in line for customs and had to fill out the standard form listing what they brought back from their trip (moon rock and moon dust samples) their flight information (Apollo 11), and their route (Cape Kennedy, Florida to Honolulu, Hawaii, with a layover on the moon).

I am not making this up; it really happened.

Most often, rules and policies are developed either to standardize reoccurring events or to control misbehavior. I understand that, but sometimes rules need to yield to good sense and sound judgment.

The first time Mary and I visited Copenhagen, Denmark, we were finishing a 12-day cruise of the Baltic states. We disembarked the ship at 7:30 a.m. and went directly to the hotel where we would stay for the next two nights. We were told that there were no rooms available because they were being cleaned. Okay, that’s reasonable. We would wait in the lobby for the first available room.

Several hours later I inquired again and got the same answer, “The rooms have not been cleaned.”

Argh! We waited eight hours in the lobby and were finally given the key to a room at…3:00 p.m. (We would have toured the city during the time we were waiting for a room but it was a national holiday and everything was closed.) The hotel’s not-well-thought-out but strictly enforced policy created unnecessary inconvenience for its clientele.

View rules as guidelines, not as commandments carved in stone brought down from Mt. Sinai. Make exceptions to rules when commonsense requires it.

12 Replies to “Allow for exceptions to rules”