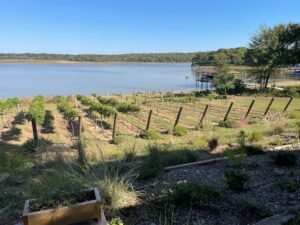 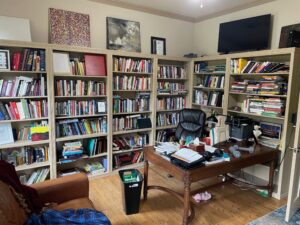 According to Cicero, if you have a library and a garden, you have everything you need in life. That may be an exaggeration, but I have both and can confirm that they are life-giving. Here are pictures of my library and vineyard.

Relative to libraries and books, we read for the pleasure and benefit of thinking another person’s thoughts. Here are five books that I have enjoyed and have benefited from.

A Gentleman in Moscow — Amor Towles

This novel chronicles the plight of the Count Alexander Ilyich Rostov, a former aristocrat sentenced to a life of house arrest at the Hotel Metropol in Moscow The Count’s saga begins in 1922, in the wake of the Bolshevik Revolution, and unfolds over the course of 32 years. Stripped of his spatial liberties, Rostov is forced to confront limited circumstances in the confines of the Metropol.

Upon his sentencing, a 32-year-old Rostov returns to the Metropol to find himself relegated from a grand suite to an attic room. It’s within these humbler living quarters that he contemplates a maxim imparted to him by his godfather: “If a man does not master his circumstances then he is bound to be mastered by them.”

The ending will stay with you forever.

Daniel Kahneman and Amos Tversky were two Nobel Prize-winning Israeli psychologists who developed much of the base work behind behavioral finance, including recency bias, hindsight bias, anchoring, how ideas form in the mind, and others. Their friendship was exemplary; their work fascinating.

This book is a biography of these two great thinkers, an insight into their friendship, and an explanation of their work. The last line of the book made me cry.

Think Again:The Power of Knowing What You Don’t Know—Adam Grant

In 1933, the philosopher Bertrand Russell wrote that “the fundamental cause of trouble in the modern world is that the stupid are cocksure while the intelligent are full of doubt.” While this is just as true today as it was in the early twentieth century, the problem actually runs deeper; almost everyone recognizes arrogance and overconfidence in others—but never in themselves.

Since the time of Russell, what’s become known as the Dunning-Kruger Effect has been experimentally validated. Research shows—and personal experience confirms—that those who are the least knowledgeable in a subject tend to be the ones who overestimate their own knowledge and abilities, while those who are full of doubt know enough about the topic to better gauge the extent of their ignorance. [from Amazon review by Ryan Boissonneault]

I enjoy reading everything Adam Grant writes. This book was particularly good (and humbling).

Pierre de Fermat was an amateur mathematician of the seventeenth century who claimed he had proved one of the world’s greatest mathematical problems: No three positive integers, a, b, and c, satisfy the equation an + bn = cn for any integer value of n greater than 2. In the margin of his journal he wrote, “I have discovered a truly marvelous demonstration of this proposition which this margin is too narrow to contain.” But no one ever found a copy of his proof. For 350 years, mathematicians around the world tried to recreate a proof of Fermat’s “last theorem,” as it was called, and failed. But in 1994, Professor Andrew Wiles wrote a 130-page proof, thus solving the world’s greatest mathematical problem. This book tells the fascinating story.

The Road to Character—David Brooks

This book focuses on “résumé virtues” vs. “eulogy virtues.” Instead of asking, “What do you do?”Brooks wants us to ask ourselves “What is my character?”

Through a series of essays of great people (Eisenhower, George Marshall, George Eliot, Augustine, and Samuel Johnson), Brooks leads us through his journey toward developing his best character: moving toward love, humility, joy, a greater purpose, passion.

His conclusions include: We don’t live for happiness…we live for holiness. We are famously flawed but also splendidly endowed. In the struggle against your own weakness, humility is your great virtue and pride is the greatest vice. Character is built from your constant inner confrontation.

It’s a book everyone should read.