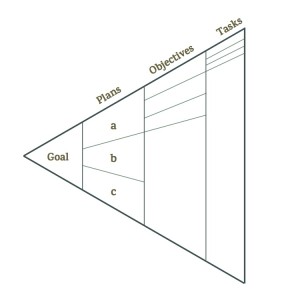 The Guinness Book of World Records tells the true story of a man who ate a bicycle, tires and all. But he didn’t eat it all at once. Over a period of 15 days, from March 17 to April 2, 1977, Michel Lotito of Grenoble, France, dismantled his bike, melted the parts into small, swallowable units, and consumed every piece.

I can’t imagine why anyone would want to eat a bicycle, but the anecdote does suggest that a seemingly impossible goal can be accomplished if it’s broken down into small, manageable parts.

Often, goals (particularly, large and complicated ones) are never realized because we don’t know how to break down a seemingly impossible task into small units of work. If your goal is simple—get the oil changed in your car—this skill is not needed. But if your goal is large—earn a graduate degree; start your own business—you’d better master this approach.

Keep asking “how” until you arrive at a set of tasks that can be done in one hour or in one setting. Depending on the size of the goal, sometimes you’ll need to ask “how” six or seven times. For each task you must also ask, “When will this be done?”

When a part is segmented into smaller units, it’s important that the sum of the smaller units equal the part. For instance, in this diagram, a+b+c = the goal.

A huge goal may need to be broken down into hundreds if not thousands of smaller tasks, each one contributing to the whole.

For instance, in 1962, President John F. Kennedy challenged the nation to “put a man on the moon by the end of the decade.” This enormous goal was inevitably reduced to thousands of small tasks. A small machine shop in East Texas completed one of those tasks. They fabricated a small gear that was part of the Apollo 11 spacecraft’s hydraulic pump. One day, someone approached a janitor who was sweeping up the shop floor and asked him why he did what he did. The man replied, “I’m helping to put a man on the moon.”

This approach will not only help us accomplish large goals, but it will add meaning and perspective to our small tasks. A seemingly insignificant and mundane activity—like sweeping the floor—will have new meaning because it is connected to a larger, more noble goal.

Summary
What? – Major goals can only be accomplished if they are broken down into smaller, more manageable parts.
So what? – Make sure you understand this process.
Now what? – Commit yourself to a major goal; it will probably take a lot of resources to accomplish it, so choose carefully. Then, using the above diagram, break down the goal into smaller, more manageable units of work, and then start accomplishing each task.

Leaders – When was the last time your organization completed a large goal? Do you and your team members know how to accomplish major projects?

2 Replies to “Reduce large goals to doable units of work”