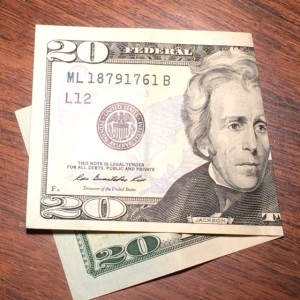 The quickest way to double your money is to fold it in half and put it in your back pocket. -Will Rogers

The Millionaire Next Door, written by Stanley and Danko, is full of surprises. The authors’ massive research project sought to determine the profile of the average American family that had a financial net worth of at least a million dollars. They discovered that typical millionaire family members:

One of the key commonalities among this group is that they are frugal and live well below their means.

It pays to be frugal.

Both my wife and I grew up poor, so being frugal was embedded in our lifestyle from childhood. I’m so frugal that I’ve been banned from eating at all-you-can-eat restaurants in 35 states.

We’ve discovered that small savings add up to significant amounts of money. Our frugality has paid off. We’re one of the families that Stanley and Danko talk about in their book.

On a commercial level, the benefit of being frugal can be profound. An article in the New York Times magazine noted: “While working the line at Harley-Davidson’s factory in York, Pa., Mark Dettinger noticed a small problem. The plastic piece that held electrical parts to the front of a motorcycle, a piece about the size of a hardcover book, wasn’t fitting correctly. Every time a new bike came down the line, it took a few extra shoves to push it into place. In fact, it took an extra 1.2 seconds.

Dettinger, who had spent some 20 years at the York plant, knew that every second counted. With 400 motorcycles built each shift, on two shifts a day, an extra 1.2 seconds per bike added up to 2,200 lost bikes annually. Millions could be lost in revenue. Maybe it wasn’t such a small problem. [New York Times Magazine, Feb. 2, 2014, pages 16-17, by Adam Davidson]

Benjamin Franklin said, “The way to wealth depends on just two words, industry and frugality.” Stanley and Danko would agree, and so would I.

What? – Frugality is a good thing and longterm, it makes a huge difference.
So what? – Be careful with your finances. A few good practices (abide by a budget, always get multiple bids, audit expenses, etc.) can make a big difference. It’s never too late to start being financially prudent.
Now what? – Gain control of your finances and be thrifty.