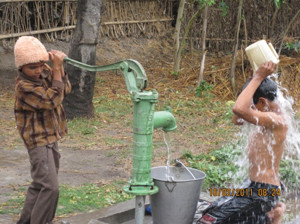 We drink from wells we did not dig; we are warmed by fires we did not kindle. —Ancient proverb

Chief of Staff, General Marshall, is told that three of a woman’s four sons have been killed and that she’s going to receive the notifications of their deaths in the same week. When he learns that a fourth son, Ryan, is engaged in battle and is unaccounted for, the general sends a unit to find him and bring him back, despite being told that it’s highly unlikely that he is still alive and the area that he was known to be in is very dangerous.

The military assigns Captain Miller (played by Tom Hanks) the unenviable task of leading a small squadron of eight men behind enemy lines to find Private James Francis Ryan, who parachuted into German-held territory the day before.

The squad makes its way across the devastated countryside, losing two members in skirmishes with the Germans. Eventually they find Ryan dug in with his unit, awaiting a German counter attack. He refuses to leave his comrades and Miller agrees that his squad will stay to help them defend their position. The Germans attack in overwhelming numbers and Miller and most of his squad is killed, but Ryan survives and makes it home.

The film ends with an old Private Ryan, now in his 70s, with his family at the military cemetery at Normandy, looking at the grave of Captain Miller.

Upon remembering the sacrifices that were made so he could live, Ryan asks his wife, “Have I been a good man? Have I lived a good life?”

In many ways, we all drink from wells we did not dig. We benefit from the farsightedness and unselfish sacrifices of those who precede us. We, then, should be grateful and humble and strive to give to others as we have been given to. If not, we may harbor the illusion of self-sufficiency and secrete the putrid smell of ungratefulness.We need to ask ourselves probing questions, similar to what Private Ryan did in the Normandy cemetery. Questions that will reveal our core motivations and prompt us to pursue altruistic goals.

When I was in high school, my church choir went on some exotic and expensive trips. My sophomore year we toured Europe for three weeks. When I was a junior we went to Mexico. My senior year we traveled in Asia for three weeks. Being raised in a low-income family, we didn’t have the funds for those opportunities, but somehow I went on every trip. Who paid for my trips? What anonymous donor provided the funds? I’ll never know. But just thinking about it gives me pause. I am filled with gratefulness and prompted to give to others.

Summary
What? – Be grateful for predecessors who gave of themselves for your benefit. Then, motivated by gratefulness, aspire to live a life that will benefit others, both now and after you are gone.
So what? – If you are unaware of and ungrateful for what you have inherited, you may become increasingly self-sufficient, self-centered, and wrongly motivated.
Now what? – Identify specific individuals who gave so you might have. Be grateful, and aspire to give to future generations.

Leaders – Does your organization have altruistic goals? Are you digging wells from which others may someday drink?

8 Replies to “Be grateful for the sacrifices of others”