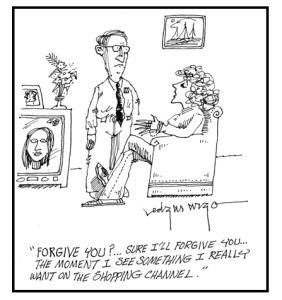 This is why we must forgive even if our offender doesn’t ask for forgiveness. Our offender may never ask forgiveness so we must choose to forgive, otherwise we will suffer twice: once at the offense and on a continual basis if we harbor anger or hurt.

When President Lincoln was asked how he was going to treat the rebellious Southerners when they had finally been defeated. The questioner expected that Lincoln would take a dire vengeance, but he answered, “I will treat them as if they had never been away.”

Summary
What? Forgiving others will bring relief to both the offender and the offended.
So what? Make forgiving others a consistent part of your life.
Now what? During a time of quiet reflection, make a list of those who have offended you. As an act of your will, forgive them.

Leaders – The mental and emotional condition of your team members will, for better and for worse, affect their work and ultimately the organization. Unresolved issues in both private and work relationships will hamper productivity. The willingness to forgive others will resolve many of these issues.

A recent blog—Include these three phrases in your conversations—addressed some of these issues.

9 Replies to “Forgive others”