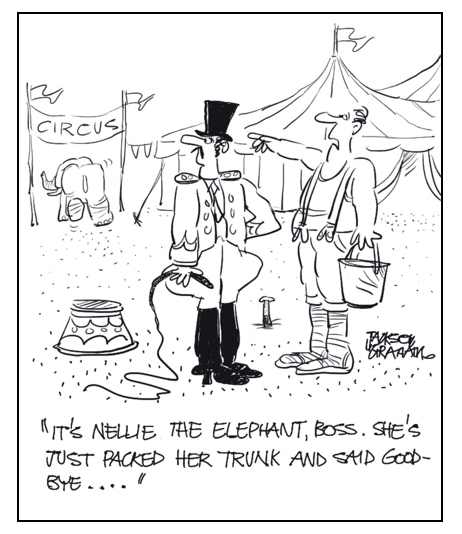 Beginnings are important. First impressions, initial greetings, the commencement of a trip—how something starts is important. The “front door” is critical.

But we should also carefully negotiate endings—that is, how to properly close the “back door” of a relational encounter or event. A proper ending will enhance the experience and bring good closure. A mishandled ending can be awkward and leave a bitter aftertaste.

For instance, how could proper closure be negotiated in each of these situations?

An excerpt from the novel—Life of Pi by Yann Martel—provides a vivid illustration of a botched farewell.

Here’s the setting: Following a shipwreck, a young boy named Pi has been on a life-raft for 200+ days with a tiger named Richard Parker. They have developed an interesting and, in some ways, close relationship. The raft finally washes ashore, but the closure of their relationship is awkward and disappointing.

When we reached land, Mexico to be exact, I was so weak I barely had the strength to be happy about it. We had great difficulty landing. The lifeboat nearly capsized in the surf. I streamed the sea anchors—what was left of them—full open to keep us perpendicular to the waves, and I tripped them as soon as we began riding a crest. In this way, streaming and tripping the anchors, we surfed in to shore. It was dangerous. But we caught one wave at just the right point and it carried us a great distance, past the high, collapsing walls of water. I tripped the anchors a last time and we were pushed in the rest of the way. The boat hissed to a halt against the sand.

I let myself down the side. I was afraid to let go, afraid that so close to deliverance, in two feet of water, I would drown. I looked ahead to see how far I had to go. The glance gave me one of my last images of Richard Parker, for at that precise moment he jumped over me. I saw his body, so immeasurably vital, stretched in the air above me, a fleeting, furred rainbow. He landed in the water, his back legs splayed, his tail high, and from there, in a few hops, he reached the beach. He went to the left, his paws gouging the wet sand, but changed his mind and spun around. He passed directly in front of me on his way to the right. He didn’t look at me. He ran a hundred yards or so along the shore before turning in. His gait was clumsy and uncoordinated. He fell several times. At the edge of the jungle, he stopped. I was certain he would turn my way. He would look at me. He would flatten his ears. He would growl. In some such way, he would conclude our relationship. He did nothing of the sort. He only looked fixedly into the jungle. Then Richard Parker, companion of my torment, awful, fierce thing that kept me alive, moved forward and disappeared forever from my life.

I struggled to shore and fell upon the sand. I looked about. I was truly alone, orphaned not only of my family, but now of Richard Parker, and nearly, I thought, of God. Of course, I wasn’t. This beach, so soft, firm and vast was like the cheek of God and somewhere two eyes were glittering with pleasure and a mouth was smiling at having me there.
After some hours a member of my own species found me. He left and returned with a group. They were six or seven. They came up to me with their hands covering their noses and mouths. I wondered what was wrong with them. They spoke to me in a strange tongue. They pulled the lifeboat onto the sand. They carried me away. The one piece of turtle meat I had brought from the boat they wrenched from my hand and threw away.

I wept like a child. It was not because I was overcome at having survived my ordeal, though I was. Nor was it the presence of my brothers and sisters, though that too was very moving. I was weeping because Richard Parker had left me so unceremoniously. What a terrible thing it is to botch a farewell. I am a person who believes in form, in the harmony of order. When we can, we must give things a meaningful shape. It’s important to conclude things properly. Only then can you let go. Otherwise you are left with words you should have said but never did, and your heart is heavy with remorse. That bungled goodbye hurts me to this day. I wish so much that I’d had one last look at him in the lifeboat, that I’d provoked him a little, so that I was on his mind. I wish I had said to him then—yes, I know, to a tiger, but still—I wish I had said, “Richard Parker, it’s over. We have survived. Can you believe it? I owe you more gratitude than I can express. I couldn’t have done it without you. I would like to say it formally: Richard Parker, thank you. Thank you for saving my life. And now go where you must. You have known the confined freedom of a zoo most of your life; now you will know the free confinement of a jungle. I wish you all the best with it. Watch out for Man. He is not your friend. But I hope you will remember me as a friend. I will never forget you, that is certain. You will always be with me, in my heart. What is that hiss? Ah, our boat has touched sand. So farewell, Richard Parker, farewell. God be with you.” [Martel, Y. (2001). Life of Pi, Harcourt Books, pp. 284-286]

The next time you approach the ending to a significant encounter or event, carefully orchestrate a good ending.

4 Replies to “Bring proper closure to relational encounters and events”