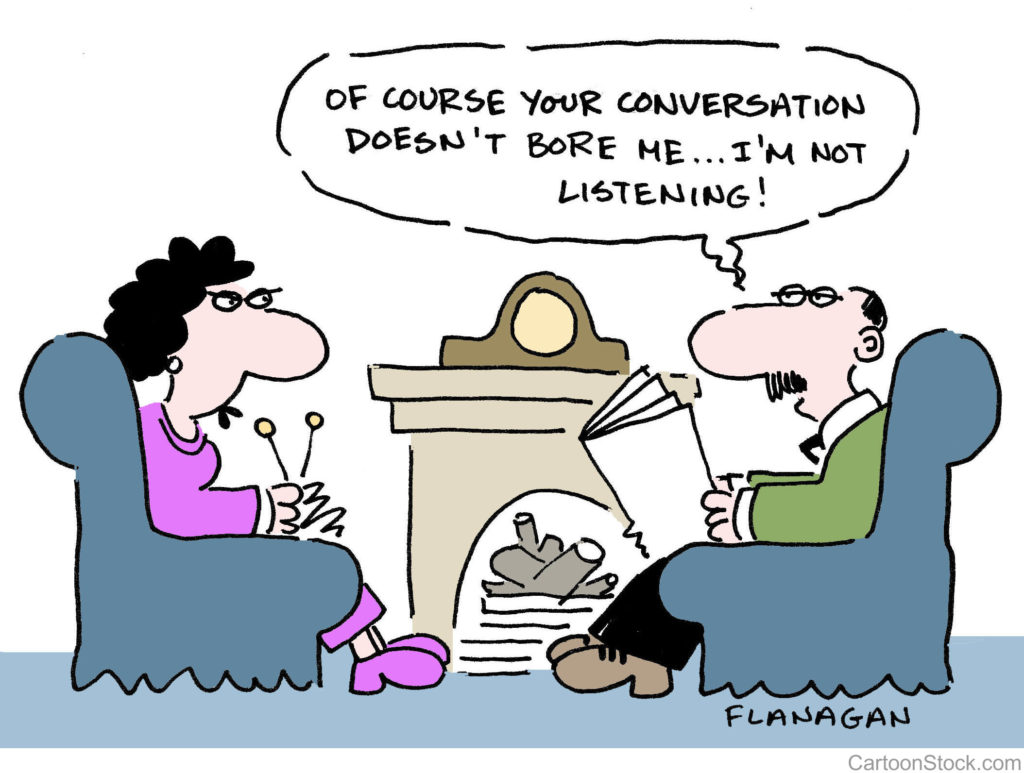 Here are three “rules of engagement” that will enhance your conversations. Talk about them with those whom you frequently converse with and incorporate them in your dialogues. They can become “verbal shorthand” to improve communication.

Sometimes a conversation grows stale because we’ve talked too long about one topic.There’s a limit to how long we need to talk about yesterday’s ballgame or the bill the Senate is voting on next week. A conversation often begins to stall but no one takes the initiative to change topics and there’s no mechanism to subtly do so.

Here’s a solution: In our conversations, let’s adopt the term “ding” to indicate a change of topic. It’s reminiscent of clinking the side of a water glass with a spoon; just say, “ding” to let people know you intend to introduce a new topic. If the current conversation is not finished, someone can simply say, “Before we ‘ding’ let me say one more thing…”

Sometimes, in a conversation, I may sense that someone is sharing a strong, heartfelt opinion or thought—there’s a strong emotional element to what he is expressing.

If I immediately counter his thoughts or start to share my perspective, he may feel that I’m not listening and that I’m dismissing his thoughts. So the proper response is for me to be quiet and simply listen.

But if the conversation ends and I’ve not had the opportunity to share my thoughts, he may think I agree with his position and conclusions. (I can imagine him saying at a later time, “You didn’t say anything so I just assumed you agreed with what I said.”)

So, let’s use the term “dong” when we’re having a conversation in which one person is sharing strong convictions and the other person will be passive and not say much. But that doesn’t mean the quiet one agrees with what is being said.

Either person can “dong” the conversation. At the beginning of the conversation, the person who has something strong to express may say “dong” as if to say, “I need to express my thoughts; please hear me out; if you don’t voice your thoughts about the issue I won’t assume you agree with me.”

Or the person who is listening may plead the “dong-rule” during or at the end of the conversation as if to say, “I want to (or did) listen carefully to what you’re saying; I’m not going to share my thoughts about this topic at this time, but don’t assume my silence indicates my agreement.”

Use this cue to suggest that the topic of conversation be postponed to a later time. The topic does need to be discussed but not here and now.

When the “later” gesture is used, it might be helpful to immediately agree on when the delayed conversation will take place. This is particularly helpful if one person repeatedly defers conversations.

In my family we consider these three expressions to be “terms of engagement”; they are useful conversational tools.