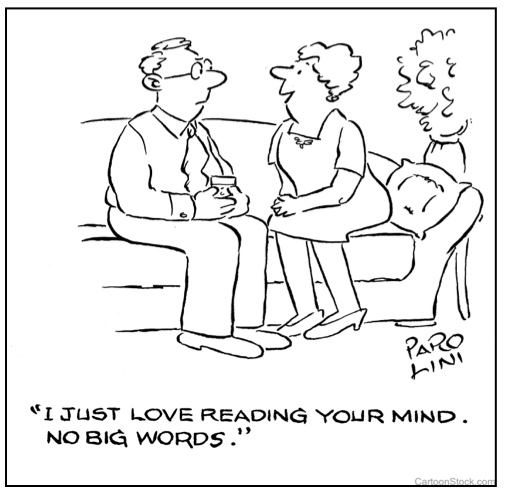 Several years ago I attended a concert at the Nasher Sculpture Center in downtown Dallas. About 80 audience members stood in a circle around the musicians. A baritone soloist and six disparate instruments performed Eight Songs for a Mad King by Peter Maxwell Davies. Completed in 1969 it is one of the most distinctive and disturbing musical compositions of the twentieth century. The eight songs document the imagined events from King George III’s famous and well-documented descent into insanity.

It’s a disconcerting 30-minute composition. Hard to listen to. The vocal soloist sings, shrieks, yells, and gesticulates. The instruments play chaotically. There are few melodic figures and no formal structure.

After the concert, the audience was invited to a reception. I struck up a conversation with a fellow audience member. Midway through the conversation she asked me, “What did you think of the Davies’ composition?” My response: “I didn’t like it at all. It was too esoteric; it was hard to listen to; musically it made no sense.” She calmly and gently responded: “Don’t you realize, the music was portraying the mind of an insane person. It represented how a mad person thinks.”

I’ll never forget her gentle rebuke; it was both instructive and challenging. I think of it often.

One of the hardest things to do in life is to “get into another person’s mind” and think and feel as he or she does. We live in our own minds 24/7 so it’s hard to imagine how other people experience the world.

Let’s experiment with this concept. Think of someone you know well and try to mentally enter into his world; try to think and feel as he might. Consider their fears, insecurities, blind spots, emotional imbalances, hurts, personal history, family of origin issues, hopes, and dreams. What does he think and feel when he enters a new social environment?

While it’s hard for us to imagine what life is like experienced through another person’s mind, we should try. Otherwise, we’ll not truly understand other people and our empathy will be misinformed or lacking.

Here’s a video of a performance of Davies’ work. I’ll give a wooden nickel to anyone who can watch the entire video.

4 Replies to “Getting into another person’s mind”