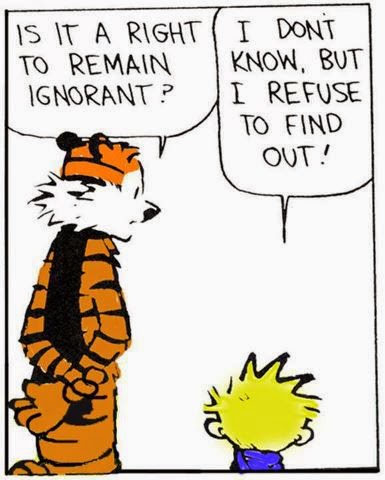 While differing widely in the various little bits we know, in our infinite ignorance we are all equal. —Karl Popper

Donald Rumsfeld was the U.S. secretary of defense under both presidents Gerald Ford and George Bush. One of his claims to fame was to distinguish different kinds of knowing and not knowing. He said:

I want to add one phrase to his statement and comment on each one.

There are known knowns. Things we know that we know.

I know how to tell time, that I live in the 21st century, how to drive a car, that chianti wine is made from the Sangiovese grape, basic math, etc.

There are known unknowns. Things we know we don’t know.

I don’t know how to speak Mandarin, overhaul a car engine, understand the Higgs boson, or perform an appendectomy.

There are unknown knowns. Things we think we know but we don’t. (My sentence.)

In their good book, The Knowledge Illusion, Sloman and Fernbach make an unassailable argument that all humans know much less than we think we do; we all suffer from the illusion of understanding. For instance, how does a flush toilet really work? Or a speedometer? A quartz watch? We’re familiar with these items but we have no clue how they work.

To me, this is the most frightening and exhilarating truth. Frightening because I’m unaware of threats and compromises that may assail me. Exhilarating because there are infinite realms of knowledge that I can explore, enjoy, and benefit from. We are all unique in what we know, and similar in our infinite stupidity.

Rumsfeld’s statement was in the context of military threats and opportunities, in which most unknowns are seen as dangerous and threatening. But in a civilian context, unknowns can represent an infinite source of good and beneficial knowledge.

An important prerequisite to lifelong learning is to become progressively convinced of our unfathomable ignorance and to develop a keen desire to pursue the unknown.

Since 2006, a course entitled Ignorance has been taught at Columbia University. Guest scientists are invited to speak about what they don’t know. The course focuses on things that are not in textbooks and thus teaches students to think about what is unknown and what could be known.

If I lived in New York City, I would enroll in this course.

8 Replies to “Domains of knowledge and ignorance”