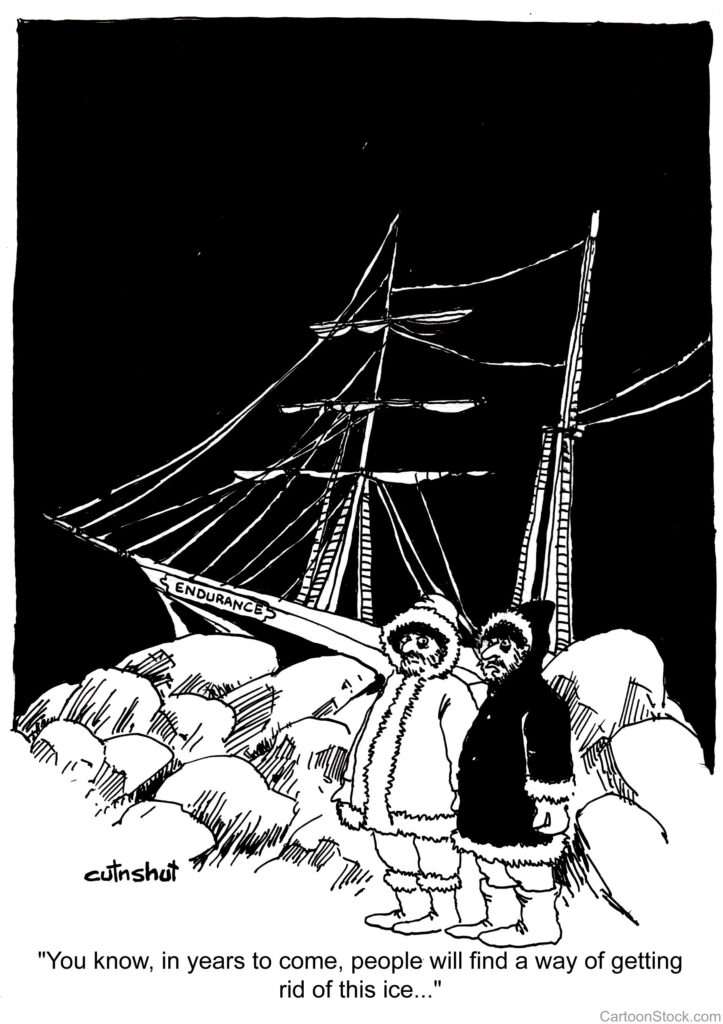 Sir Ernest Henry Shackleton was a polar explorer who led four expeditions exploring Antarctica. He is best known for his 1914-1916 attempt to traverse the Antarctic which, although unsuccessful, became famous as a story of remarkable perseverance and survival.

There are many books about the Endurance Expedition (Endurance is the name of the ship), and they all portray Shackleton as an exemplary leader. But I recently watched a documentary that caused me to think differently. [Shackleton’s Captain on Amazon Prime. The film focuses on the ship’s captain, Frank Worsley, who was the second in command under Shackleton.]

On October 26, 1914, the Endurance left Buenos Aires, headed for Antarctica. Eleven days later it arrived at South Georgia Island, a Norwegian whaling station. The whalers there reported that the early summer was colder than usual and the ice conditions to the south were the worst they had ever seen. They strongly advised Shackleton not to go, but he ignored their advice and ordered the ship to continue on the journey. Days later they encountered pack ice a thousand miles farther north than expected. It was ludicrous to continue, but despite the pleas of the ship’s captain, he insisted that they continue south.

It was a terrible mistake. Within days the ship became trapped in ice. As one crew member said, “We felt like an almond stuck in the middle of a chocolate bar.” The ice eventually crushed the ship and the 28 members of the expedition had to abandon ship and set up camp on floating ice. For the next two years they struggled to survive unthinkable challenges. Remarkably, the entire crew made it back safely.

But why did Shackleton risk the lives of his men?

Historians note that before the expedition, Shackleton had trouble at home—he was having an affair with an American actress and his brother was convicted of fraud that might incriminate Ernest—so he needed to create a new narrative about his life. Furthermore, it would have been a blow to his ego to abandon or even postpone the trip.

He was also profoundly self-promoting. Before the ship set sail, he had each crew member sign over all rights to their journals and diaries. He made sure all publicity promoted him as the hero. However, the real hero of the expedition was Frank Worsley, the captain. (Shackleton was inexperienced at sea, having never even been in a medium-sized boat.) But few people know of the valiant work of Worsley.

It’s commendable for a leader to lead well in the midst of a crisis (think Churchill during WW2), but if the crisis was avoidable and caused by the leader, there’s no glory in that.

12 Replies to “Was Ernest Shackleton a good leader?”