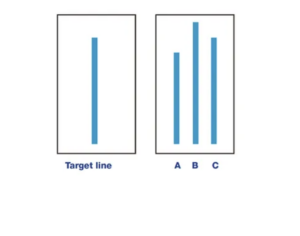 The correct answer is obvious: C.

But that’s not the answer many people chose in an experiment conducted by social psychologist Solomon Asch.

In 1956, Asch conducted a series of experiments in which he would invite eight people to participate in a simple “perceptual” task. The participants were shown the two boxes you just looked at. Each were then asked to say aloud which line in box two matched the length of the line in box one.

But seven of the participants were actors and only one was the “subject.” Before the experiments began, the actors were told how to respond; the subject gave his own answer. The group was seated such that the subject always responded last.

When all seven actors unanimously chose a wrong answer (A or B), 36.8% of the time, the subject agreed with their response, even though it was obviously the wrong answer.

The experiments revealed the degree to which a person’s own opinions are influenced by those of groups. Asch found that people were willing to ignore reality and give an incorrect answer in order to conform to the rest of the group.

When asked his opinion regarding the study results, Asch said, “That intelligent, well-meaning, young people are willing to call white black is a matter of concern.”

This experiment exposes our vulnerability to peer pressure, groupthink, herd mentality, and tribal influence. It should prompt us to be independent thinkers and courageous conversationalists.

12 Replies to “Are you an independent thinker and courageous conversationalist?”