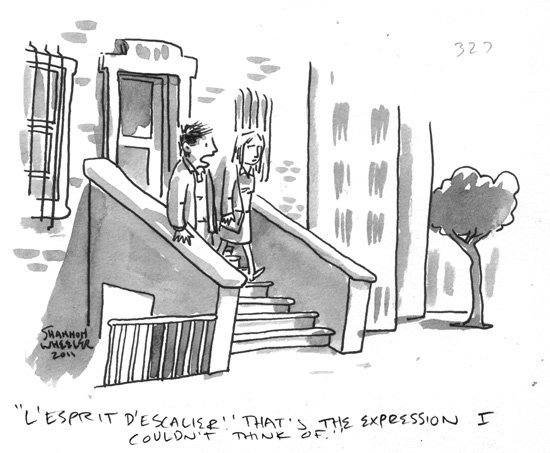 In 18th century French architecture, the reception area and meeting rooms in hotels, mansions, commercial, and governmental buildings were on the second floor, accessible by a grand staircase. Important conversations, negotiations, and treaties were held on the second floor. After leaving a meeting, one would walk down the stairs to exit the building.

Denis Diderot, a French philosopher from the 18th century, coined a phrase—L’esprit de l’escalier—that describes a feeling we’ve all had. Esprit means mind, thoughts, spirit. Escalier means stairs. The phrase describes the feeling of having left a conversation or negotiation and suddenly realizing that you did not respond or negotiate well. You wish you could return to the conversation or meeting but you cannot; you’re at the bottom of the stairs and you can’t turn back. It is a blend of regret, doubt, second thoughts, and wanting to relive the moment.

I’ve had the feeling often. Years ago I walked into a jewelry store to sell my Rolex. The owner asked me, “How much do you want for the watch?” I gave him a price. He smiled and said, “Okay.” I had that sinking feeling that I had asked too little.

Remembering the “spirit of the staircase” will help us be more careful and will lead to better decisions.

4 Replies to “L’esprit de l’escalier – “now, I know what I should have said””