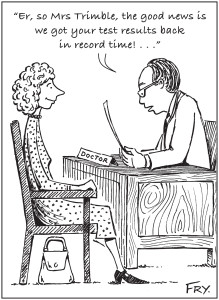 In their must-read book, ethics [for the real world] authors Howard and Korver tell a winsome story that illustrates the importance of proper framing.

Two monks who were heavy smokers would often smoke and pray together in the evening. They became concerned that their smoking habit was a sin. So they each asked their superior for guidance.
They met again the next day. The first was puffing away when the second arrived. “But the head of the monastery told me it was a sin,” protested the second. “What did you ask him?” said the first. “I asked him if it was all right to smoke during our evening prayer, and he said no.”
“Well,” said the first monk, “I asked if it was all right to pray during our evening smoke, and he said it was just fine.”

In the social sciences, framing refers to a set of concepts and theoretical perspectives on how individuals, groups, and societies organize, perceive, and communicate about reality. With the same information being used as a base, the “frame” surrounding an issue can change the perception without altering the actual facts.

Consider two applications of this information.

When communicating to others, consider how you’re going to frame what you want to say. When is the best time to speak? Who is your audience and how can you tweak your message to best appeal to this group? What is best left unsaid?

I’m not endorsing manipulation; we need to be straightforward and guileless in communicating with others. I am suggesting that we be thoughtful, prudent, and wise in both what we say and how we say it.

Here’s a final illustration of the power of framing. In his terrific book, Me, Myself, and Us, Professor Brian Little describes an experiment he conducts with his psychology students. He asks each student to form spittle in his or her mouth and then swallow it. They do so without hesitation. Then he asks the students to once again form spittle in their mouths but this time he tells them to put the saliva into a small plastic cup. He then asks them to swallow the spit in the cup. They refuse. Why? Framing.

What? – The way in which something is presented greatly influences how people perceive and receive it.
So what? – 1. Be leery of being misled and manipulated by shrewd framing. 2. When communicating with others, carefully consider how you frame what you want to say.
Now what? – The next time you communicate something important to an individual or group, create several frames that could be used and then choose the best one.

Leaders – Intelligent framing can enhance your communication, PR, sales, and marketing. But avoid being manipulative.