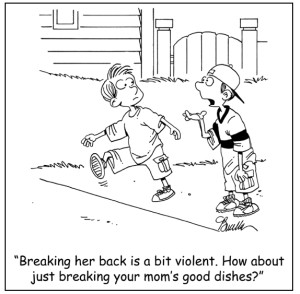 Some people believe the silliest things.

I think we all can agree that this deep-seated irrationality is nonsense. Most of it just sounds nutty. Carrying a rabbit’s foot will bring good luck? There’s a relationship between astronomical phenomena and human events? Blow out all the candles on your birthday cake in one breath and you’ll get whatever you wish for?

I doubt if any of my readers embrace the ridiculous examples cited above, but many of us may yield to more subtle forms of superstition that exist whenever correlation is confused with causation. Correlation is when two or more things or events tend to occur at about the same time and might be associated with each other, but aren’t necessarily connected by a cause/effect relationship. For instance, consider the following hypothetical situation.

A small town in East Texas hires a new sheriff, and a year later the robbery rate is down 50%. The city council assumes that the drop in crime is because the new sheriff is doing a terrific job so they extend his contract and give him a raise.

The problem is, while there is a valid correlation between hiring the new sheriff and the drop in crime, it is wrong to infer causation from this sequence of events. The crime rate may be down because the criminals, having already robbed most of the town’s wealth, have moved to another town that holds more opportunities. Or perhaps an aggressive home-security company has installed security systems in most of the homes and stores. So the new sheriff may or may not be the primary reason for the drop in burglaries.

The only way to prove causation is by a controlled experiment.

I doubt if any of us, in this age of science and reason, naively embrace obvious superstitions. But we may succumb to subtle forms of superstition when we inadvertently confuse correlation and causation.

What? – We often confuse correlation with causation. When we do, we succumb to a subtle form of superstition.
So what? – This can lead to faulty and unproductive decisions and behaviors.
Now what? – Analyze your life and eliminate superstitious behavior.

6 Replies to “Don’t be superstitious”