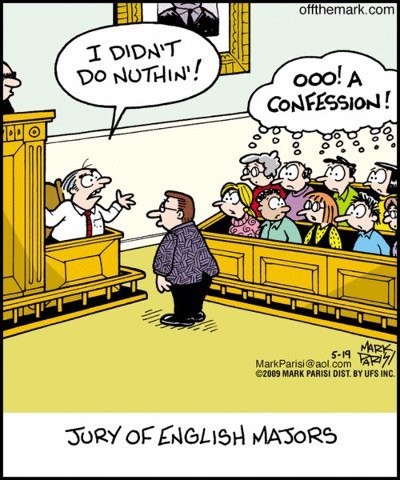 Relational offenses are inevitable. It’s not a matter of if you’re going to offend someone, just a matter of when and how seriously. The best and perhaps the only way to make things right is to confess your offense and ask forgiveness.

Her are some characteristics of a good confession.

You should confess to everyone who was privy to a particular offense. If three people heard you yell at your spouse, you need to confess to four people.

If you just think poorly about someone but don’t actually say anything, you don’t need to confess to that person; in fact, doing so might create unnecessary hurt and confusion.

2. Confessions are most effective when we take initiative to confess without having to be confronted.

Can you sense the difference in these two scenarios?

Joan: Hey Bob, got a minute?
Bob: Sure, what’s up?
Joan: When we were having lunch yesterday you said something that really offended me.
Bob: Oh yeah? What did I say?
Joan: It was the comment about my work on the Meyers project.
Bob: Oh, that bothered you? Well, okay, perhaps it did come across a bit tacky. Sorry about that.

Bob: Hi Joan, got a minute?
Joan: Sure, what’s up?
Bob: Yesterday, when we had lunch together, I made a tacky comment about your work on the Meyers project. It was wrong of me to say what I did. Would you forgive me?

Hurts don’t come in generalities; they are specific. So our confession must be specific. Can you sense the difference between these two statements?

Offenses are not only technically wrong, they hurt the offended person. So when we offend someone, we should confess our wrong and address the hurt that we caused. For instance, if I yell at my children, I have not only wronged them, I have hurt them. I must deal with both the technical aspect of being wrong and also the emotional dimension. That’s why a good confession will often involve empathetic words such as, “I’m so sorry that I hurt you by yelling.”

You may even want to ask the offended person to elaborate on how your offense has affected him or her.

Just saying “I’m sorry” can compromise and even neutralize a confession. For instance:

When confessing an offense, don’t include any statements that would dilute the confession. Do not:

For a confession to be complete, we must ask to be forgiven. The best way to do this is simply to say, “Will you forgive me?” Hopefully, the offended person will forgive you.

If he or she does not, and you have genuinely and properly confessed, you have done all that you can and should do; it is now the other person’s decision whether or not to forgive you, but regardless of his or her response, you should be free from guilt.

12 Replies to “When you offend someone, confess and ask forgiveness”