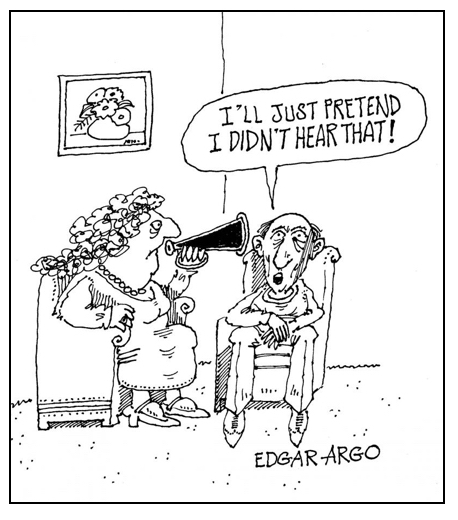 In every good marriage, it helps sometimes to be a little deaf. I have followed that advice assiduously, and not only at home through 56 years of a marital partnership nonpareil. I have employed it as well in every workplace, including the Supreme Court. When a thoughtless or unkind word is spoken, best tune out. Reacting in anger or annoyance will not advance one’s ability to persuade.   Supreme Court Justice Ruth Bader Ginsburg [This excerpt from Ginsburg’s new book My Own Words appeared in a New York Times article.]

Your spouse, friend, colleague, or total stranger makes a silly, unnecessary, provocative, or dubious statement. It may be, at best, trivial, inaccurate, vague, or unfair; at worst, it’s tacky, wrong, even hurtful.

When is it okay to just let verbal flatulence slowly dissipate without addressing it, and when is response compulsory?

As Ginsburg advises, sometimes no response is the best response.

Put yourself on the other side of these hypothetical conversations. How often do you say something that you later regret saying? When you say things that should have remained unsaid, aren’t you appreciative when someone offers you conversational grace?

Granted, there are times when unwholesome words should be addressed, particularly if someone is a repeat offender. Chronic verbal abuse is inexcusable and should not go unchallenged.

In the coming days, exercise the “Ginsburg-restraint.” It is a tool we all need in our relational toolbox.

12 Replies to “Sometimes be a little deaf”