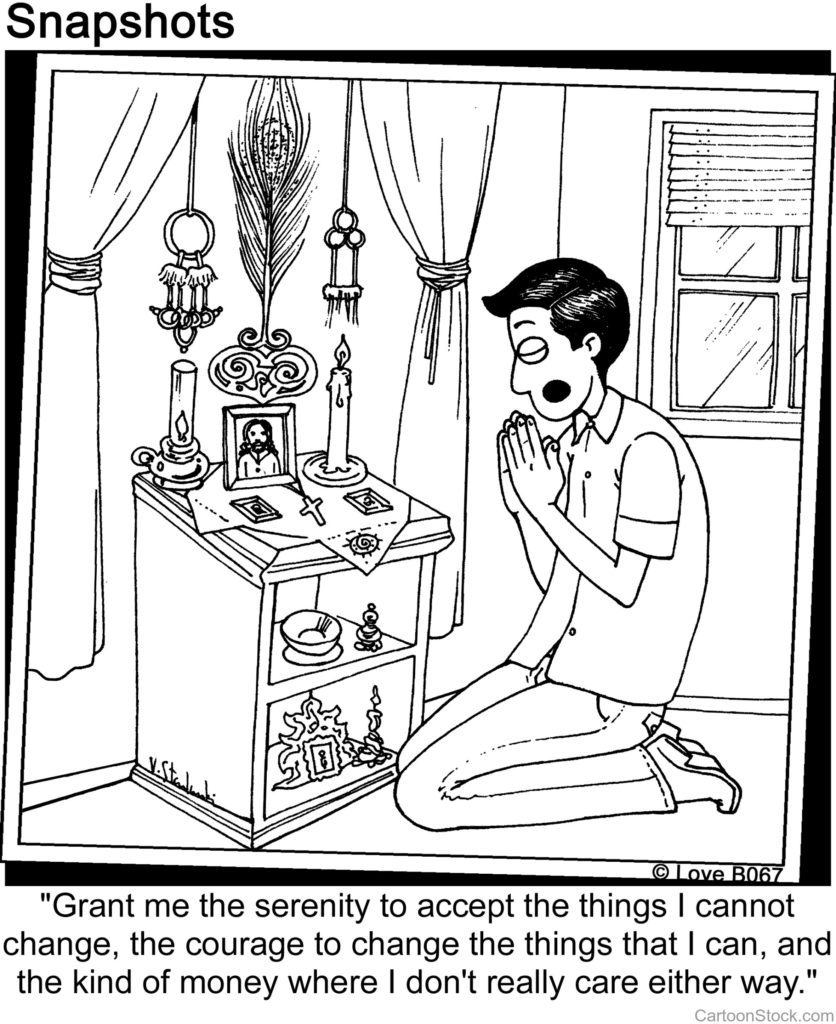 God grant me the serenity
to accept the things I cannot change;
courage to change the things I can;
and wisdom to know the difference.
Serenity Prayer – Reinhold Niebuhr (1892-1971)

I think often of Niebuhr’s advice. It gives me solace and helps me order my thoughts and actions. It instructs me on when I can take initiative and be aggressive and when I must be calm, even passive. He connects three nouns with three verbs: serenity to accept, courage to change, and wisdom to know.

Most issues in life fall into one of two categories: things that I cannot change and things I can. Consider the following issues. Which ones can you control?

What category would you place virtues in? (A virtue is a behavior showing high moral standards.) Do you have control over whether or not you are honest, friendly, patient, teachable, or punctual? Or are these somehow genetically determined such that you may be exempt from accountability?

For instance, I once had a direct report who was often tardy. When I confronted him he replied, “Yeah, my grandfather was always late, my father was too, I guess I just inherited it.” I told him that he was wrong. There was no such thing as a “ tardy gene”; it was an aspect of life he had control over. I shared how, as a young adult, I, too, was often late to appointments and disrespectful of schedules but that through discipline and conscientious work, I had changed. Now I am fastidious about being punctual. As an employee, he would need to improve in that area.

There’s just no good excuse for being deficient in any of the virtues.

Here’s an abridged list of 28 virtues. On a scale from 1 to 10 [1 being “I’m not very good at this”; 10 being “I excel at this.”], rate yourself in each area. Then take responsibility to ratchet up your score in each area. It will be a lifelong pursuit.

If you’re raising children, these virtues create a good curriculum to work on. Before a child leaves home, aspire that he or she understands each area and is striving to excel.

2 Replies to “Focus on things you can change; the power of Niebuhr’s prayer”