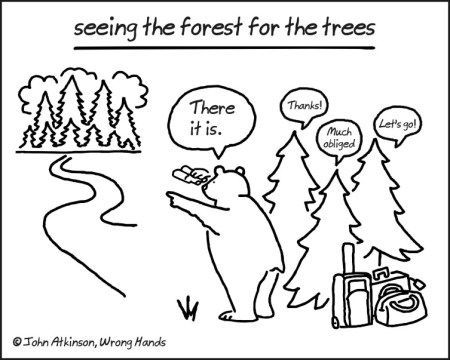 A helicopter is able to hover over a specific geographical area and change altitude quickly. It can be at 200 ft. one minute and then quickly rise to 5,000 ft. A fixed-wing plane can’t do that.

Leaders, continually negotiate a “helicopter perspective” on your organization. Sometimes you must think granularly and get involved in micro aspects of the organization; at other times, you may need to shift to a “high-altitude” and consider macro concerns. See the forest and the trees.

The Sewell family has been selling cars in the Dallas area for 100 years. Their 13 luxury-car dealerships are known for superior customer service.

Carl Sewell III is the current leader of the corporation. His assistant told me this story.

“One day I overheard Mr. Sewell talking on the phone with the CEO of General Motors. They were discussing global issues: the world economy, the Federal Reserve raising interest rates, and the price of steel on the commodities market. When the phone call ended, Mr. Sewell walked from his office to the parts department and asked, ‘Have we received the front bumper for Mrs. Johnson’s Escalade?’ He shifted from a 5,000 ft. perspective to a 200 ft. one in a matter of minutes. He was able to toggle between big-picture and granular issues.”

In their great book on the leadership skills of Winston Churchill, Sandys and Litman highlight the fact that Churchill had a mind for details: “Churchill was a man who mastered details without losing sight of the larger picture. He needed to know the progress of countless complicated operations. He wanted to know production figures, delivery dates, forecasts, and statistics.”

Churchill’s mind for detail is exemplified in a memo he sent to the First Lord of the Admiralty during WWII in which he suggested a way that seamen could communicate more efficiently: “Is it really necessary to describe the Tirpitz (a German Battleship) as the Admiral von Tirpitz in every signal? This must cause a considerable waste of time for signalmen, cipher staff, and typists. Surely Tirpitz is good enough for the beast.”

Leaders, don’t stay in the “clouds,” out-of-touch with the details of your organization, but don’t get so mired in details that you can’t see the forest for the trees. Maintain both perspectives.

2 Replies to “Leaders: maintain a “helicopter perspective” on your organization”