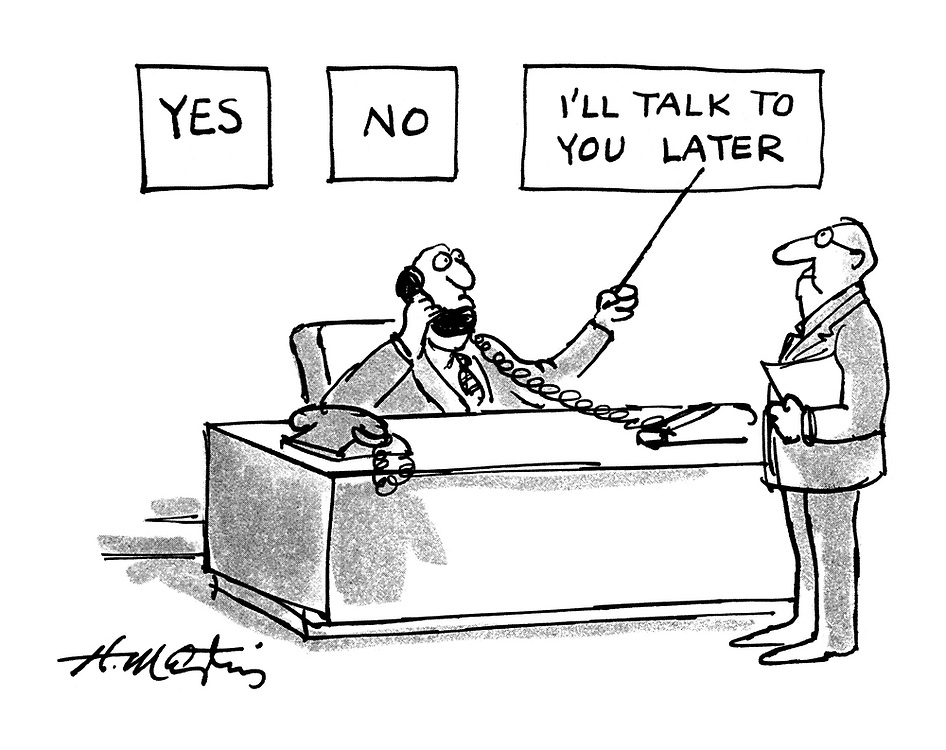 When I’m with my grandson, Benjamin, I always try to say “yes” to his requests. “Papa, will you take me fishing? Will you play with me? Can we go swimming?” Unless it’s impossible or imprudent to do so, I usually say yes.

I do the same at work; when a colleague or direct report makes an appeal, I try to respond in a positive way.

This approach has helped my marriage. For years, both Mary and I suffered from a “no-mentality.” She would ask me to do something and I would demur. I wouldn’t necessarily say “no” (I’m more cunning than that) but I would hesitate, postpone, ignore, or offer an alternative. In essence, I declined. Mary often did the same to me. Now we try to say “yes” to each other, or at least craft a positive response such as, “What an interesting idea; let’s talk about that tonight.” But if it’s a simple request (Would you clean your study?) I should simply comply.

In your interpersonal relationships, which word do you tend to say the most: yes or no? What is your default response? I’m not recommending you be a “yes-person”—someone who agrees with everything that is said and endorses or supports without criticism, every opinion or proposal. I am encouraging us to have a positive, permissive outlook on life, particularly when responding to people’s requests. The alternative is to be oppositional; quick to resist or dissent.

Sir Richard Branson once said: “I have enjoyed life a lot more by saying yes than by saying no.” And I’m sure those around him have also enjoyed that persuasion.

Here’s a good article from Fortune magazine titled “Five Reasons Why Saying “Yes” Is The Best Decision For Your Career.”

4 Replies to “In relationships, try to say “yes” more than you say “no””