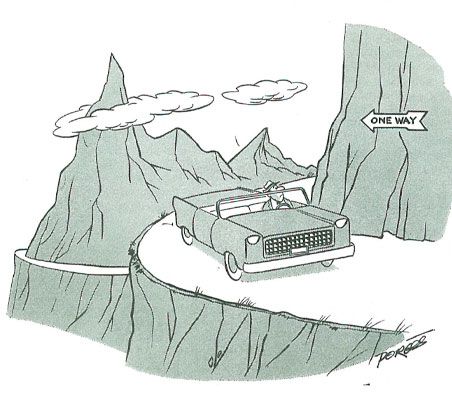 Direction is more important than speed.

Movement is better than inactivity.

If you’re inordinately passive and/or you’re stuck, just start moving. Often, movement is better than inactivity, even if you’re not sure you’re going in the right direction. Several false starts will be better than doing nothing.  And when you start moving but soon realize you’re heading in the wrong direction, you can change course. It’s difficult to steer a stationary bike.

Do you sense the tension between these two statements? One says “Don’t move until you know you’re going in the right direction.” The other says, “Stop being passive, just do something.”

Of course, correct direction and speed is optimum.

There is a scene in Lewis Carroll’s Alice in Wonderland where Alice is talking to the Cheshire Cat, who is perched up in a tree. Alice is a bit confused about her direction, so she asks the cat:

“Would you tell me, please, which way I ought to go from here?”

“That depends a great deal on where you want to go,” replies the Cheshire Cat.

“I don’t much care where,” says Alice.

To which the feline replies, “Then it doesn’t matter which way you go.”

Some people face the same predicament as Alice. They don’t really know which way they want to go in life, so they just wander aimlessly and soon become stagnant and stale, or, they don’t move at all.

Maintain a healthy balance between right direction and movement.

Last week, my friend Ward encouraged me to read Tolstoy’s short story titled How Much Land Does a Man Need? It takes about 10 minutes to read. As expected, it is simple and profound. Here’s a link to a free copy.